Good with Children:  Definitely yes! He was friendly to child at veterinarian’s office. He is energetic and sometimes “bouncy” so may not be appropriate for small children, although he has learned that jumping on people isn’t proper manners.  Our two grandsons (ages 7 and 11) spent several days here and Gus adored them.  Both boys said “Gus really likes kids – he needs a home with kids!”

Good with Dogs:  Appears to be – no dogs here but friendly to dogs at veterinarian’s office including a Pug and a 6 month old Australian Shepherd that crawled and jumped all over Gus.  He is also good with our horses and loves to touch noses through the fencing.

Good with Cats:  Yes – 2 house cats disappear when he is out, but 15 yo former feral cat hisses at him and Gus backs off immediately.  He has a great friendship with the neighbor’s cat who thinks she lives in our barn and will run out to play with Gus every morning.

House trained: Work in progress, but has not had an accident since we started crate training. The biggest obstacle in house training is distractions when we go outside.  He will give signals that he wants to go out, and will rush to the potty area as fast as I can run but once there he will be distracted by birds, squirrels, bunnies, raindrops on flowers, butterflies, leaves – anything!  In the beginning I could be outside with him for 45 minutes and he would not go.  That is much improved now.

Crate trained: Yes, will run into the crate when we say “Crate, Gus” to get his treat and then settle down.

Leash trained: Work in progress – pretty good on a very short leash, but will run and pull on a longer one and he is very strong!

Activity Level: Playful – he can entertain himself with a Kong, Nyla bone, rawhides and Pork Chomp bone. Loves to run, but after 10-15 minutes in the round pen at full throttle he is ready to come inside and lounge. He loves to chase a tennis ball but has no idea about bringing it back to us.

Fence: Fence is highly recommended.  We use a round pen (horse training pen) 6 feet high, with additional wire fencing four feet high (from the ground up) because there is open space between the horizontal rails of the pen.  Gus is never in the round pen without us and is worked off leash and on leash.  He has periodically looked as though he were measuring the height of the round pen to jump but has not made any actual attempt.

NEVER NEVER LET HIM OFF LEASH OUTSIDE OF A FENCED-IN AREA – HE IS EASILY DISTRACTED BY ANYTHING AND HAS NO RECALL WHATSOEVER! That being said, when I twisted my ankle in a depression in the round pen, fell to the ground and dropped the leash, Gus immediately ran back to me and helped me get up!

Behavior: In the house, Gus is affectionate and loves attention.  He has learned what areas of the house are off limits to him, although once in a while he needs a “Gus, no!” to remind him. None of our dogs were allowed on the furniture and Gus quickly learned with the “ACK-ACK Not for Gus!” command that furniture was off limits.  An adopter could change that if they wanted.  Gus likes to lie between our two recliners so that Butch and I have equal petting access.

Medical History:   Up-to-date on routine shots; on monthly heartworm and flea/tick prevention.  Has received Canine Influenza vaccine and is currently undergoing 3-shot series of Lyme vaccine which should be completed mid-August.

Foster Comments: Gus does not have a mean bone in his body as I soon found out when despite our efforts at “baby-proofing” he (twice!) found cat toys under the furniture and without thinking I grabbed him and pried his mouth open to get the toys before he swallowed them.  We are able to take toys and rawhide bones from him with no difficulty.  He is an only dog right now fed in a separate gated area so we do not know how he would be with other dogs or cats near his food, but he will sit while his food is put in his bowl (albeit a little wiggly!) until I say “OK.”  Our dogs have always had to rest after eating (I am very “bloat conscious”) and Gus will eat his food quickly and run back into his crate for his after-breakfast treat and rest.

I am an early riser because of our animals, so Gus gets breakfast between 4 and 5 am, and supper at 5pm (1 cup dry food each time) but he would have no trouble adjusting to an adoptive family’s schedule.  He has rarely barked and sleeps through the night with no issues.

Gus is a loving dog that deserves the perfect home, ideally with kids as my grandsons remind me.  In the 6 weeks he has been with us his personality and sweet temperament have endeared him to us, but we feel he needs a more active family, perhaps one that hikes, jogs, will take him to dog parks, etc.  Gus might like a doggy companion, but I think he would also be happy as an only dog, getting all the love and attention his family can lavish on him. 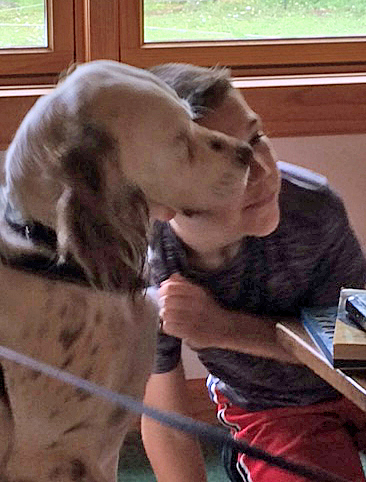 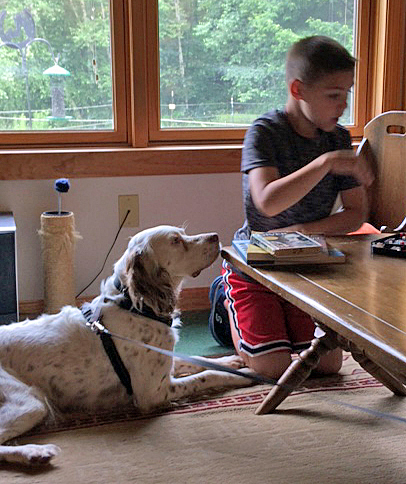 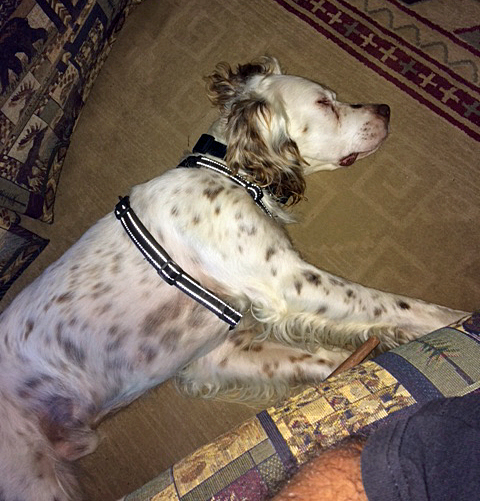