Socialization/training: Frazier is a happy boy who enjoys meeting new people. He gets along with the other bird dogs in our house and would love to meet every dog that walks by with their owners. He knows sit, down, roll-over, and is working on stay and “leave it” (all movtivated with training treats for now). He love to run along side us on a leash while we ride a bike. He also shows a strong interest in birds..

Good with Children:  Frazier is good with kids of various ages (we have 5 in our house… ages 5 to 20), but he does occassionally jump up (which we are working on breaking). He would do better with school-aged kids or older.

Good with Dogs:  Frazier gets along with both our other two dogs. He enjoys interacting with both, and plays a lot of chase when he is outside with room to run. He can occasionally play too rough with our smaller dog (who is very submissive), but he is easily redirected and is learning good manners on how to play nice.

Good with Cats:  We do not have a cat.. He is curious about other animals and definitely interested in chasing birds, squirrels, and other smaller animals that come around. He is young, so he would probably be ok with cats as long as he is supervised.

House trained:   Frazier is doing really well with house training as long as we keep an eye on him. He will go to the door (does not bark to go out yet) or start pacing around if he needs to go out.

Crate trained:  Frazier has adjusted well to his crate. He will run right in with a bite-sized treat, and he settles down for a nap as long as he has had sufficient exercise. When he is ready to wake up, he will bark to let you know he needs out.  He has never had an accident in his crate. He is used to staying in his crate when we are away from home for a couple of hours. He does not like to be in there more than a few hours and will begin to bark if he is in there much longer.

Leash trained:  Frazier is learning to walk on a leash with a harness. We enjoy taking him jogging while we ride our bikes, and he really does great with that.  He still pulls some on the leash because he is very interested in his surroundings and has a lot of energy.

Activity Level: Frazier is a higher energy dog. He loves jogging/biking and playing in our yard with our other two dogs (both of them are also young bird dogs). After he has had a good run or play, he settle down easily inside.  He likes to go out to play 3-4 times a day plus goes for a jog once a day.

Fence:   Frazier would do best in a yard with a fence so he could run off his puppy energy.  He also has a pretty good bird instinct, so he would likely get lost chasing something if allowed to run outside without a fence. If no fence is available, he will need a way to burn off energy (like jogging, biking, etc) daily.

Behavior:  Frazier is a sweet, happy boy. He is curious about his surroundings and loves being with his people and playing. He often likes to bury his head in our elbow and snuggle, but he also like to explore and really likes his toys (balls, kong, string tug toys, treat ball for kibble, etc). He is fine with our other dogs, but looks more to us for attention than them. As long as he’s had time to play and run, he easily settles down.  He also is a quick-learner, so dog obedience would be a great thing for him. He shows some potential for following birds too.

Medical History:  Frazier is current on all vaccines and tests (including bordatella). He has been maintained on heartworm preventative, flea & tick control, and is microchipped.  He is not neutered yet.  He is a healthy puppy and is still growing (he was under weight when we got him, and he is still gaining some extra weight from that). He has long, floppy ears, so his ears needed treatment when he first came to us. His forever family will need to regularly check his ears and keep them clean so that he does not have future problems with that.

Frazier, along with his siblings, was born in Greece to an English Setter mom.  Being a puppy, he is less likely to have have been exposed to Leishmaniasis, but he was checked for it and his lymph node test for that was negative. Potential adopters must be willing to commit to annual testing for the next 3 years. Your vet can draw the blood and send it to the lab. The test typically costs $120-150 but varies from vet to vet.

Foster Comments:  Frazier is a very cuddly, energetic boy.  If our current two dogs were not both under one year old, we would definitely keep him. He gets along very well with all our kids and all the people he meets. He has very soft fur, and his markings are really pretty.  He can be a little shy when he is first introduced to something new (like a kids’ sprinkler), so he looks to his people in those situations. 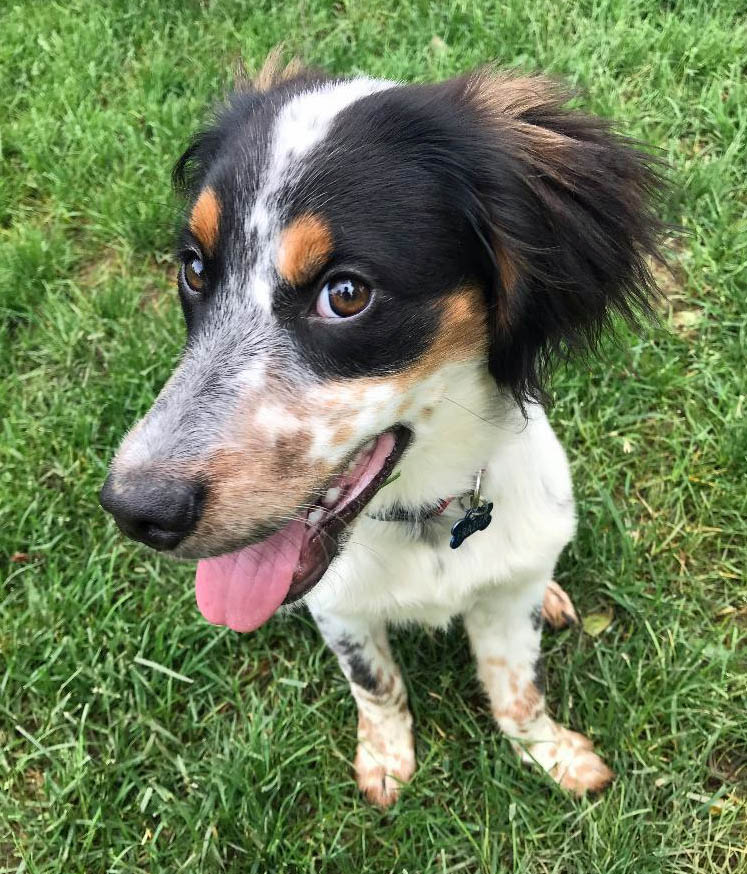 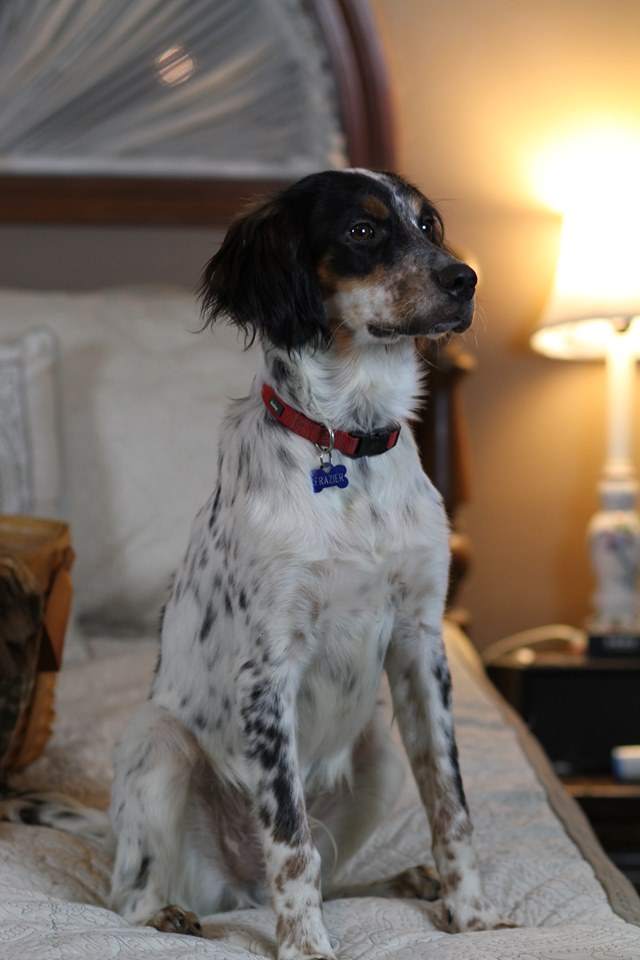 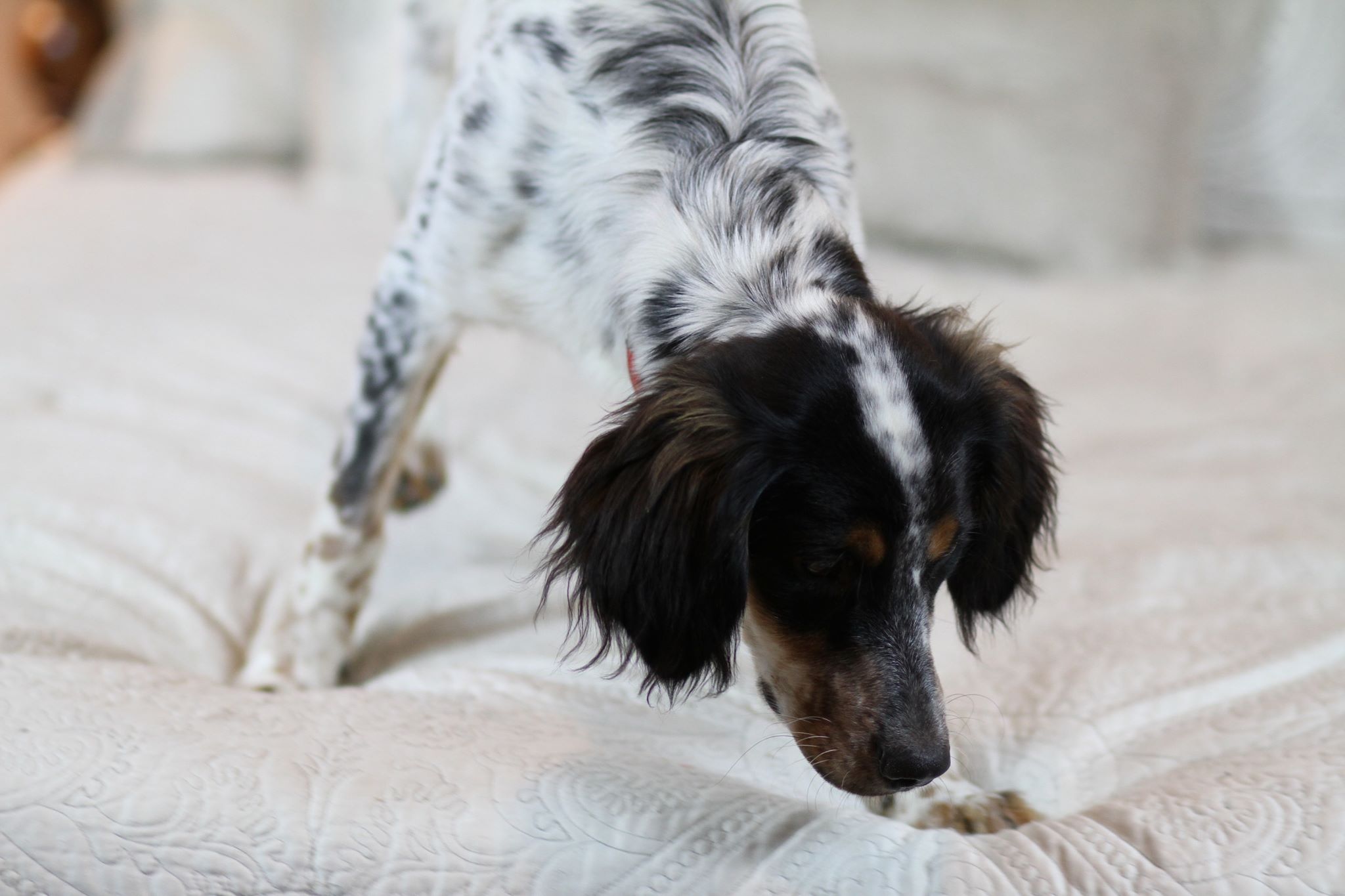 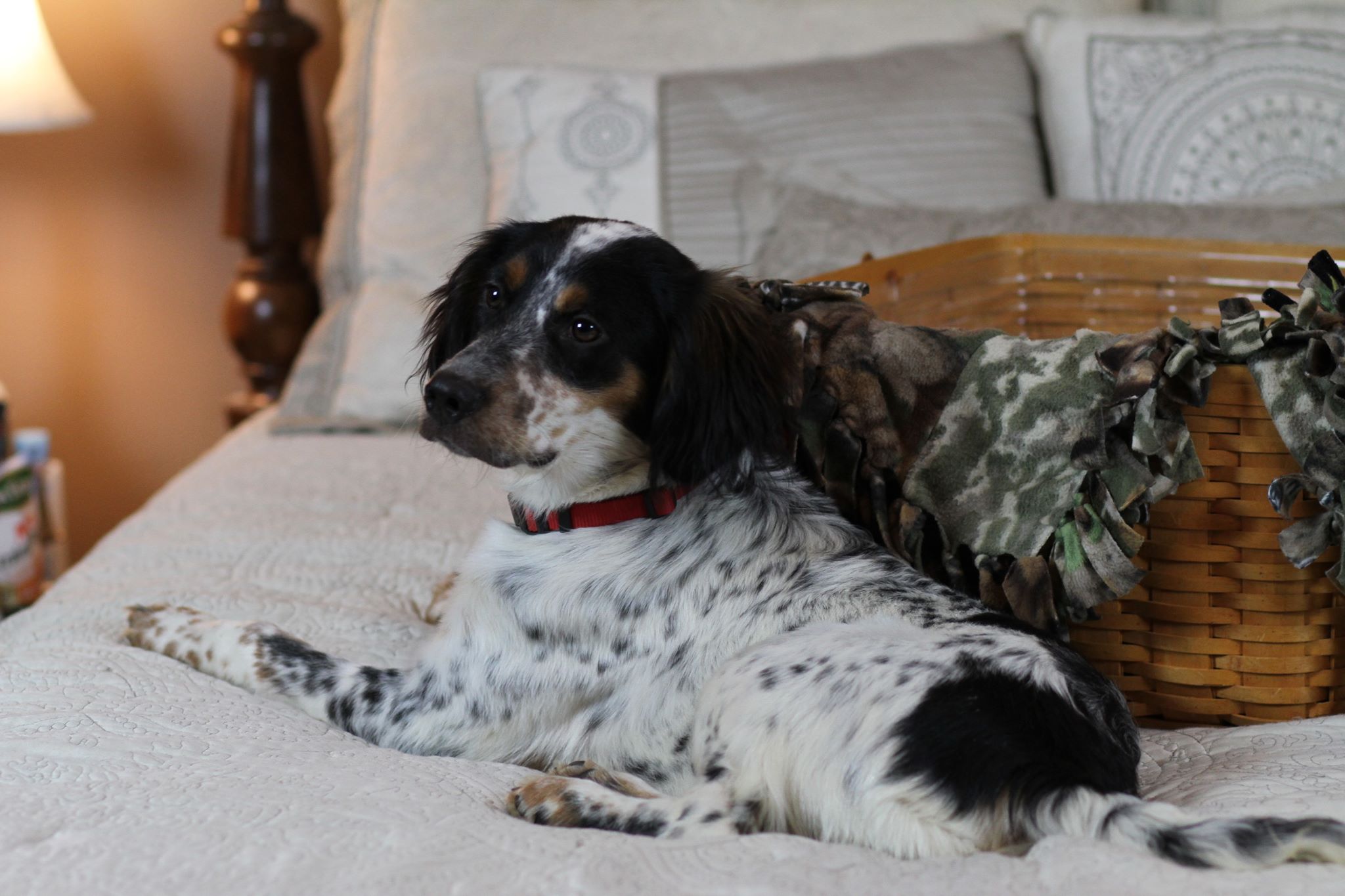 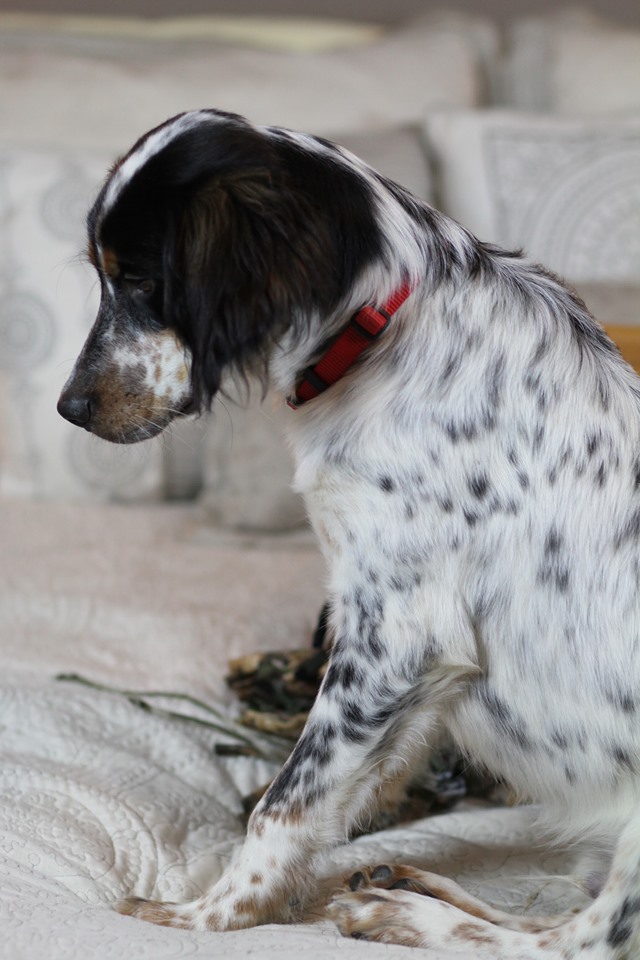 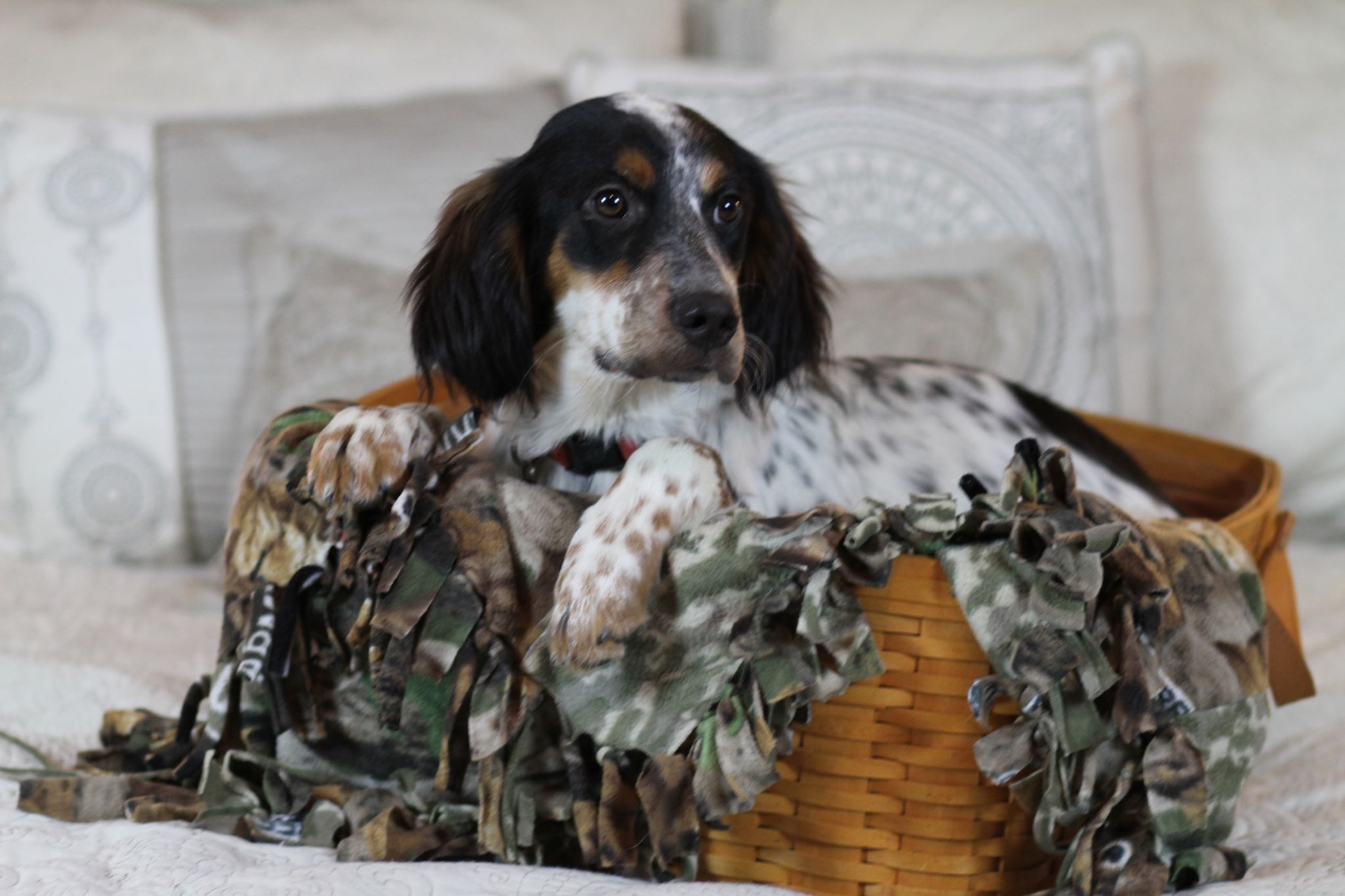 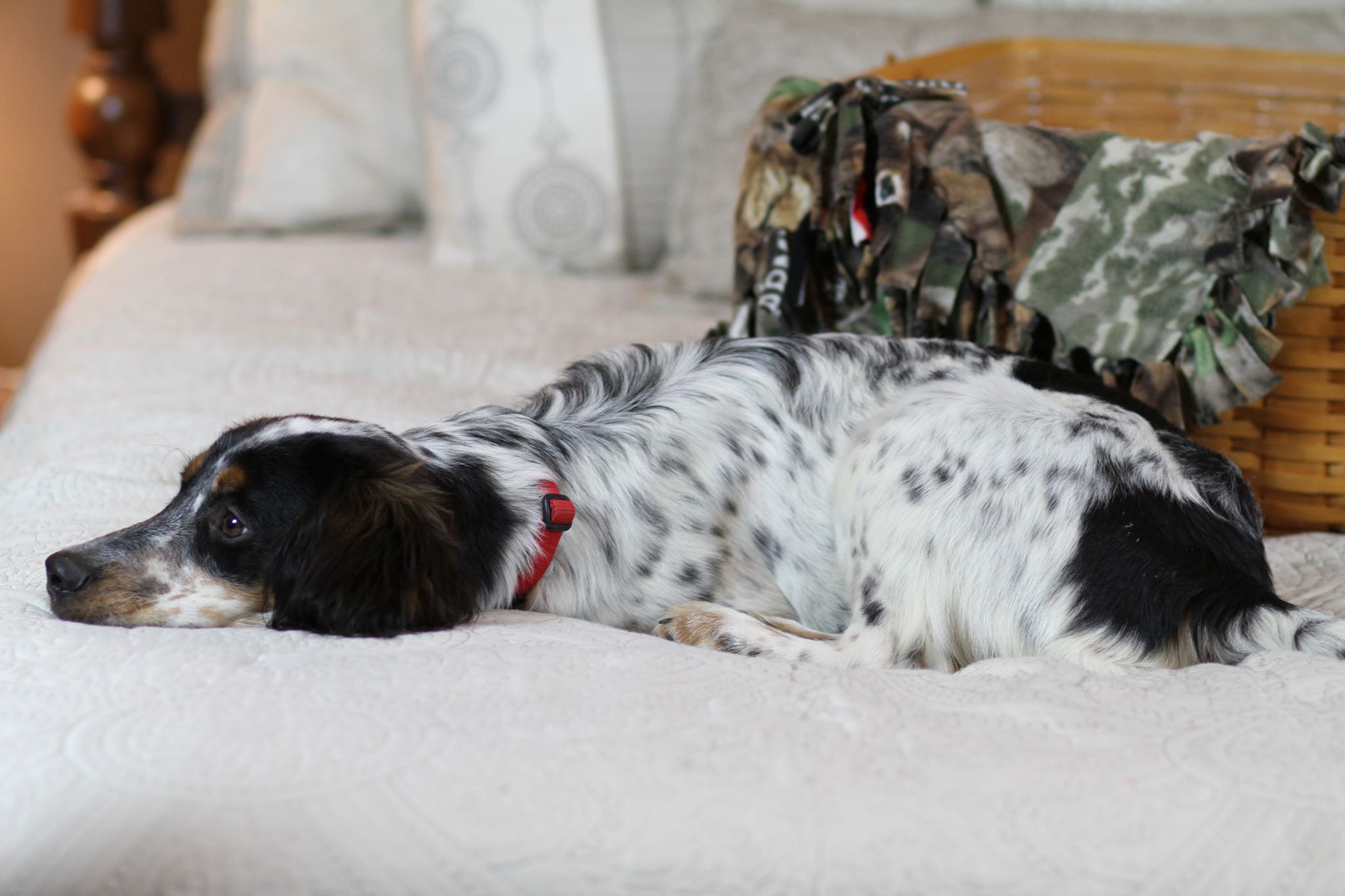 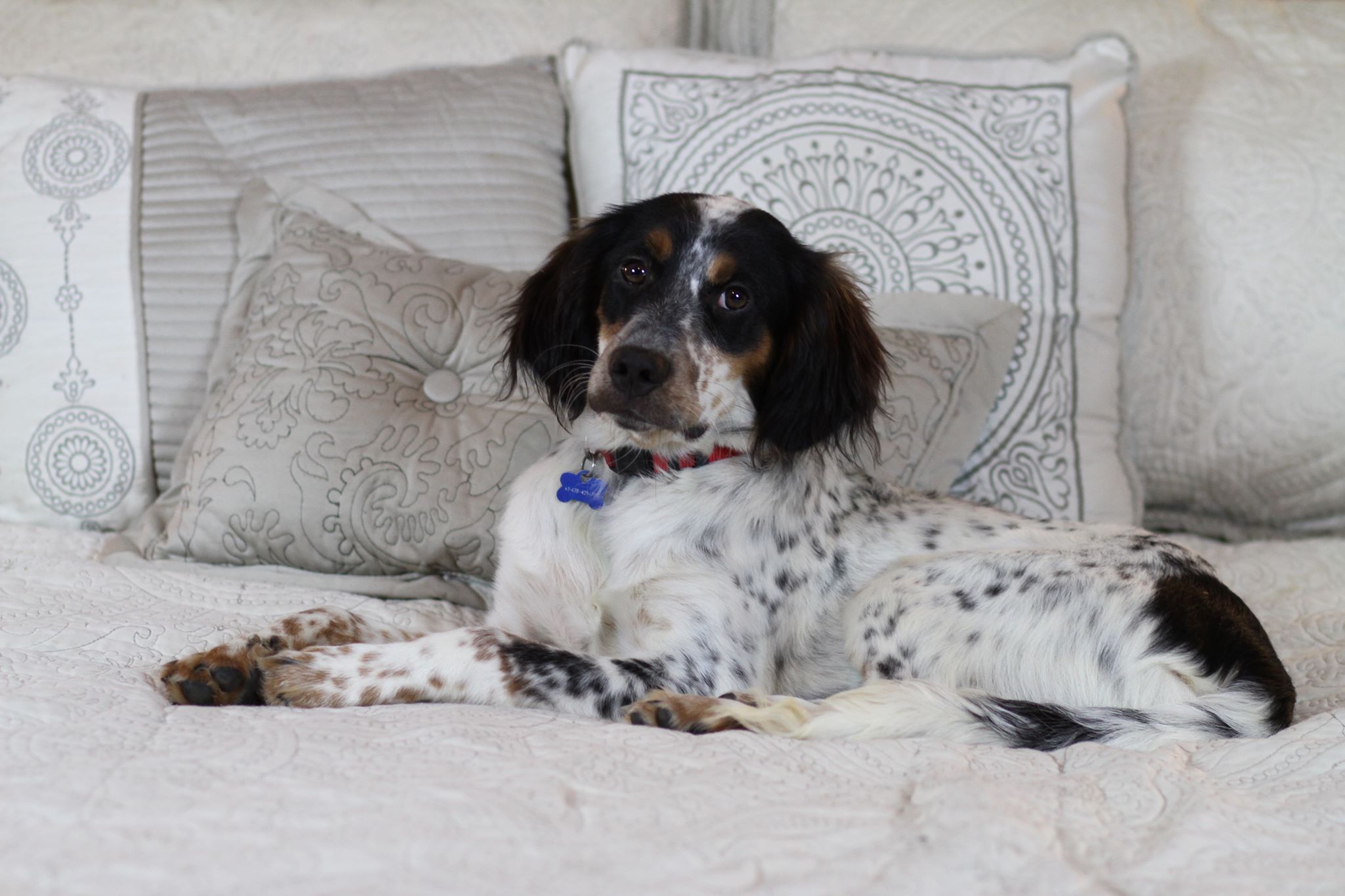 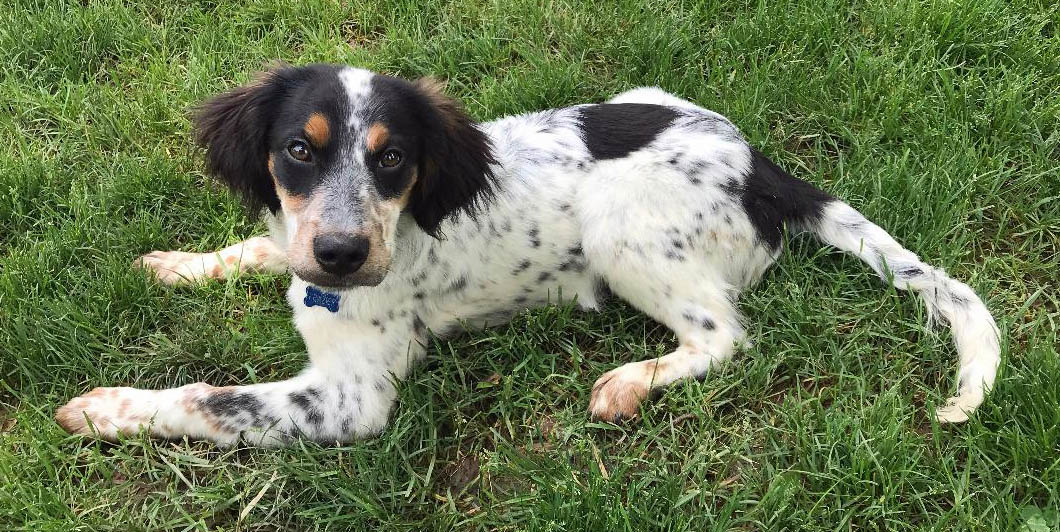 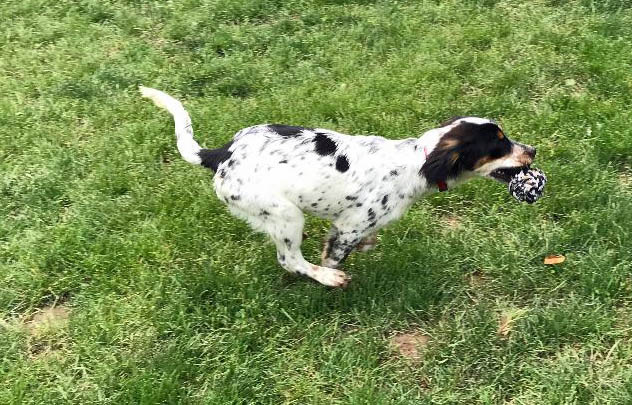 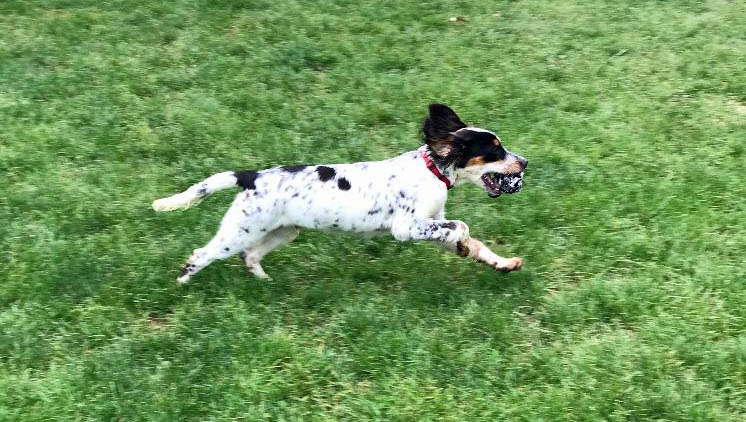